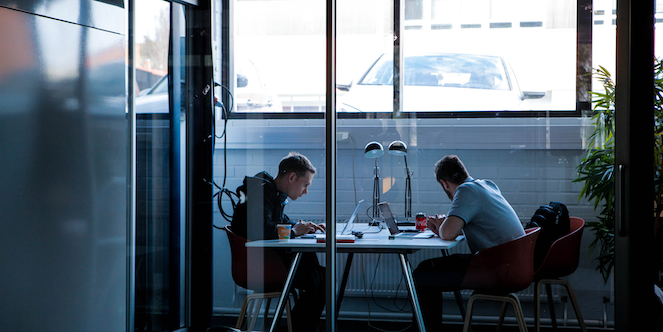 Andreas Urbanski and Topias Nurminen had the idea about AI-powered algorithmic trading for a long time, but at the beginning of 2019, they decided to do something about it – turn a hobby into a business. “We had the idea about Axinoss for like ten years and thought about founding a company around it – then it just happened to finally be the right time,”

Axinoss is developing AI powered bot for algorithmic trading. This bot analyses market data, makes investment decision and executes the trades automatically. Their AI can replace human trader and they can deliver this solution for big banks and funds. They can also use the AI to trade their own assets profitably in any market conditions.

They both had been interested in trading and investing, so starting a business around it felt natural. However, they both felt like they would need to get feedback and sparring from outside.

“We applied for the program because we wanted to sharpen the focus of our business,'' Topias explains the reason behind applying. They also felt like this would be a great chance to get to be part of the Finnish startup ecosystem.

Focusing on what matters

When applying to Kiuas Start, Axinoss wasn’t much more than just an idea. At first, Andreas and Topias were afraid that they would be too early-stage for the program.

“We didn’t have such things as customers or actual business – just technical tools which made it possible for us to start doing what we do,” Andreas opens the situation back then. Turns out, Axinoss was at a very good stage for Kiuas Start.

During the three weeks, they had a chance to dedicate their time to work on the project full-on: talk to customers, get mentoring and focus on what matters. Even though three weeks isn’t that long time, a lot can happen: Axinoss ended up pivoting slightly their solution based on conversations with customers and the feedback they received from the coaches.

Like many other participants, both Andreas and Topias found the 1-on-1 mentoring the most valuable thing during the program: “When somebody is asking tough questions, it forces you to clear your thoughts.”

Besides the connections and networks, one of the best things gained during the program was the concreteness. “After taking part in Kiuas program, your startup starts to exist,” Andreas explains.

After the program, Axinoss continued working on: a lot of research and product development have been done and Axinoss also got a Tempo grant from Business Finland. Their next goal is to start the first pilots and getting the product live.

A lot has happened since Kiuas Start. So the question is, why should one apply to the program?

“Why not? Even though your idea would end up being not that good, you’ll get great advice and learn a lot in three weeks. ”

Turn your project into a company and apply to Kiuas Start by February 20!

There are more and more social problems in the world. How can startups and technology help solve them and bring people together?